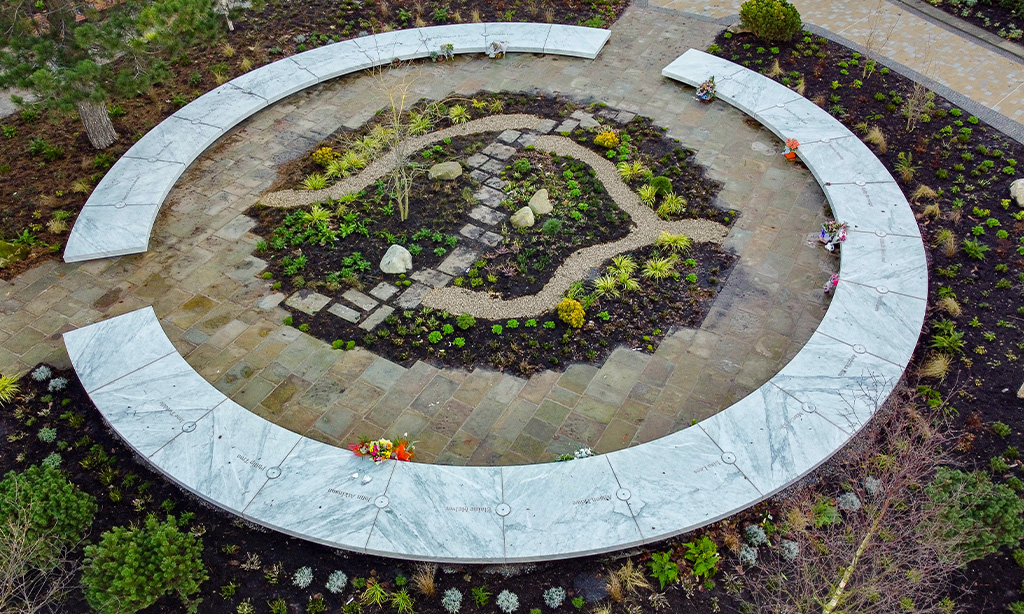 The Duke and Duchess of Cambridge joined families at the official opening of the Glade of Light memorial in Manchester today (10th May 2022).

The memorial has been created as a living memorial to those who lost their lives in the 22nd May 2017 terror attack at Manchester Arena. It also honours those who were seriously affected by the attack, as well as civic dignitaries.

The Glade of Light was conceived by BCA Landscape working in partnership with designers Smiling Wolf. Together, working closely with families, they have created a memorial which serves as a space for reflection and remembrance.

Shivani Gunawardana is a landscape architect at BCA Landscape; she said: “It has been an honour to be involved in the Glade of Light, and to help all of those affected by this tragedy as we imagine and realise this special place.

“Our design ideas have always come from a place of heart-felt respect and deep sympathy, with a design that centres around a halo of white marble featuring the names of the 22 victims set in bronze.

“We sincerely hope it becomes a special place where we can all briefly pause time, find a place of stillness and reflect a while.”

The opening event saw The Duke of Cambridge speak at a short ceremony, before he and the Duchess walked around the memorial. Speaking of their attendance Joanne Roney OBE, Chief Executive of Manchester City Council, said: “We are honoured to be joined by their Royal Highnesses for the official opening of the Glade of Light. As we approach the fifth anniversary of the 22 May 2017 attack, the Glade of Light is a potent symbol of how Manchester will continue to hold those who lost their lives, and everyone who was affected by those terrible events, in our hearts. We will never forget them.”

Council Leader Cllr Bev Craig said: “The Glade of Light memorial is a permanent fixture in the heart of our city. While we remember those affected every single day, as we approach the fifth anniversary it will be particularly poignant as we come together to mark its official opening.”

Find out more about the project here